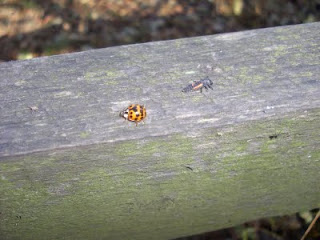 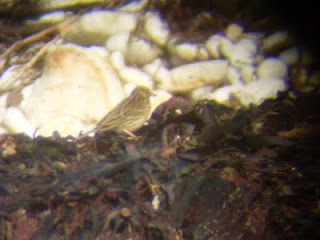 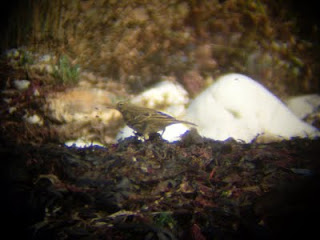 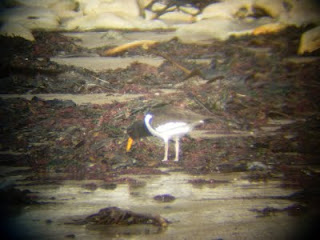 Got allowed out for 4 hours today so hit the geadland at Flamborough. Gave south landing a good workout but it only produced a handful of 'eastern' abietinus type Chiffchaff plus a nice variety of turdus. The beach produced a Mipit amongst the Rockits. Also 3 Barwits and a distant duck sp. Hmm. Not really the quality id hope for. Moved onto old fall where further eastern Chiffers were supported by an acredula type Willow Warbler. A Clouded Yellow was a butterfly lifer. Just as i went to leave a male Ring Ouzel flushed from the plantation into the hedge. Which was nice. The strange Ladybird was not one id seen before -- is it a Harlequin?
Posted by James at 22:35

Last weekend, South Landing had some turnstones, dunlin, redshanks and a lonely purple sandpiper, as well as stonechats along the cliffs. Yesterday, spent the am on the fog horn cliff but got nothing too exciting. Probable twite and also missed some passing Snow Buntings (lifers), Bah!

they trapped both by the foghorn yesterday apparently early doors.

Looks like a Harlequin to me with the classic M shape on the head and brown legs instead of black on our native species.

typical, missed the bluetail at spurn the same day but that would have mean't waiting around for about 5 hours to see it in the heligoland trap.

Someone's been watching the recent countryfile feature on ladybirds! Seriously, there were loads of Harlequins on the wooden fence around Old Fall Plantation about 10 days ago - in fact all the ladybirds we could see were Harlequins!