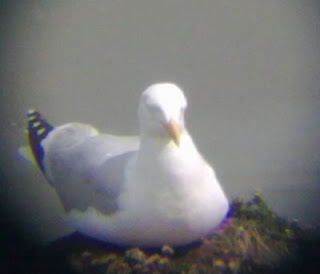 Brief but heavy showers this morning put paid to cricket and thus I decided with my wife out of the way to have an afternoon seawatching at flamboro. It wasnt spectacular but four yearticks including two self founds were nice. The rundown is c 30 Manxies, 2 Arctic Skuas (1 pale & 1 dark phase), 1 Bonxie, 5 Common Scoter, c14 Teal, c10 Redshank, 1 calidris sp., 6 Sandwich Terns but no Cory's Shearwater unlike Spurn, Grimston and North Norfolk. Also bumped into Craig Thomas who is currently deep in editing the forthcoming Yorkshire report for 2007. A few Porpoise sightings were likely the same couple of individuals that were blogging about whilst a tree south was in its winter plumage already and passed by without id.
Posted by James at 21:34