On Monday night, news that the Black-browed Albatross had not only returned from the dead but it had returned to Bempton. A frame-filling photo of it cruising along the cliff top was plenty enough to enthuse me. Sadly a busy day at work, my commitments as a parent and Englands Euro 2020 last 16 tie against Germany conspired to make a trip to Bempton extremely difficult. I sat at my desk with pin sharp pictures arriving via social media at regular intervals. I packed it all away, put on my World Cup 2006 top, dropped my cynicism and sat back for one of the most enjoyable games I have watched as an England fan. In the elation after the game, as reports of the albatross continued to roll in I asked me wife if a 'quick trip' to Bempton could be facilitated. She was also giddy from the result and acquiesced. I shot off and was nodding at Andrew Kinghorn as I limped to the cliff edge not 20 minutes later. 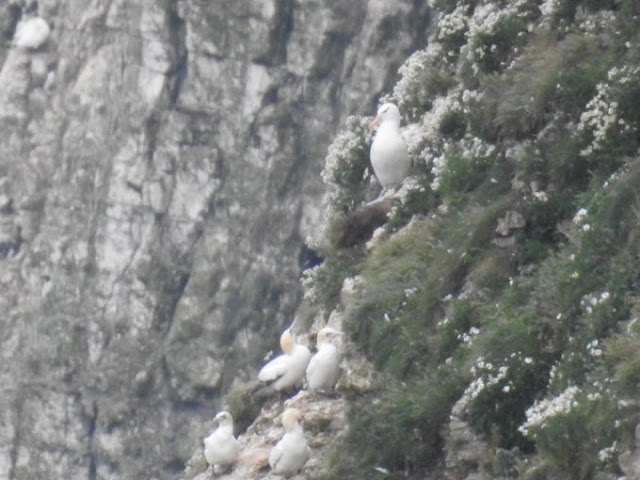 The bird itself was giving people the run around as I arrived and marching half a mile up and down the cliff top wasn't ideal, especially given I have torn the meniscus in my left knee. The bird helpfully relocated from the sea on to Staple Newk and soon I was watching it sat amongst the flowers and gannets on the upper cliff. Whilst fantastic to see, one of my overriding takeaways from seeing albatrosses in the southern oceans (well 20 miles off Sydney) is that birds in flight are far more impressive than those sat on the deck. Thankfully the bird didn't seem entirely happy in any of its resting spots and would sally round in tight loops before landing every few minutes. This allowed the full majesty of this species, which whilst only 20% bigger than the gannets is wholly more impressive in flight with its whippy wingtips and contrasting mantle and tail colour which allied with the eye shadow and mascara makes it very dashing.

Pretty soon the gloom descended and the bird moved out of sight but not before I was satiated and one of the most enjoyable days in recent memory came to a close. After missing the previous visit by mere seconds I was very relieved to get this back, especially after the stories of the bird being downed by nine White-tailed Eagles between Denmark and Sweden earlier in the spring.