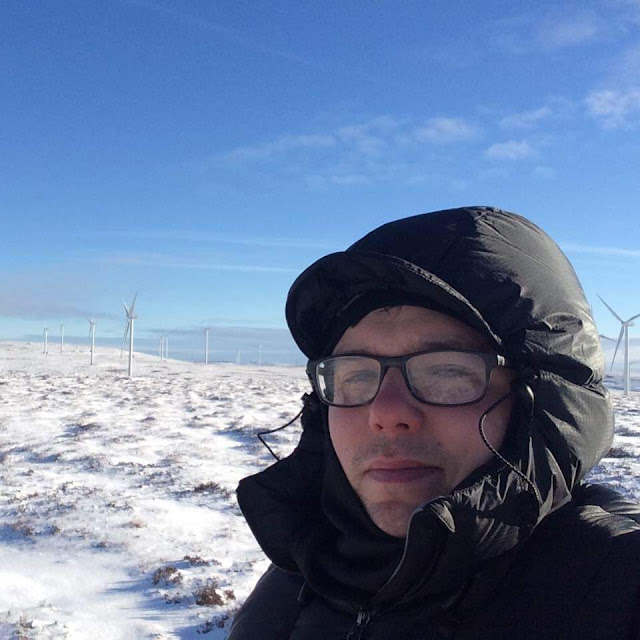 Professional, me? That is a laugh. I have however just finished a seven year, nine month and 27 day stint with Wood aka Wood Group and formerly Amec and Amec Foster Wheeler. The vagaries of the oil industry and its decline are responsible for the various changes. I am moving on. For now, it is reflection and remembering some epic birding, some great moments and being cold/wet or both a lot. I spent my first summer in South-west Scotland on the wind farm train and found an American Golden Plover on a hill in Ayrshire. Remarkably, I found the same bird, 100 miles away, at St Mary's Island in Newcastle the following week. It was definitely easier to pick amongst 7 other Golden Plover on the hill! Pete, my close mate and colleague and I shared a couple of autumns of sea watching at St Mary's where we had a flyby Surf Scoter which later settled on the Suffolk/Essex border. A Rough-legged Buzzard in Northumberland was more contentious as I found it and Pete missed it, despite it flying over the land we were both looking at for five minutes. Thankfully the locals also saw it. Pete got his own back in spades with Black Kites and Honey Buzzards.

I have had seven years in Somerset, starting in the winter of 2013/14 and culminating this January. The luxuries of Blackmore farm now a distant memory but I enjoyed the area immensely when it wasnt westerly gales, rain and freezing. There were some good finds including Caspian Gull (8 county records), Wryneck, Bee-eater, Iceland Gull, Waxwing, Leach's Petrel, Siberian Chiffchaff, Tundra Bean Goose, Black Tern, Richard's Pipit, Wood Lark and Cattle Egret (before it was dross) as well as this autumns Red-throated Pipit. I also saw Kentish Plover, Two-barred Crossbill, Hawfinch, White-billed Diver, Great Shearwater, Cirl Bunting, Eastern Yellow Wagtail, Bluetail and many other bits and pieces in the South-west during my trips. I met some very decent Somerset folk and counted a lot of birds. I didn't see Little Bittern which is an enduring source of frustration.

My acquaintance with Goshawks prior to my starting with Wood was occasional and not great. Now, I've monitored so many I cant begin to count. I've seen birds perched up close, endless display, lots of individuals of all ages. Upland raptors are hard to see but gosh are they worth the effort. In fact, I have worked on many projects in the Highlands and saw most of the specialties during surveys including nesting eagles, divers, Pine Martins, Parrot Crossbills, Capers, Hen Harriers, Black Grouse. I spent 2 months stopping an Osprey nest from being disturbed and then got cut out of the press release (haha!). I have also seen more Peregrine nests than anyone else in the UK I'd imagine and had the fortune to rescue a chick last year. I even found a Leatherback Turtle in the Irish Sea! I have been challenged regularly, I've failed often, I've even succeeded on occasion, I've worked with some dedicated professionals and I've made friends to last a life time. I'm not really supposed to post about the new job, so I wont other than to say I have one and I wont be going to site anymore which my wife will love. I am so happy to be able to be home for my family as I have been itinerant for 11 years since I started as an ornithologist and my kids will find it weird that I don't up and out for a week but they deserve my time. I have been privileged and I know it. My scope broke on site about six months after I started and my bins are knackered. I've been using work optics for years now and they travelled with me on occasion. I have just treated myself to a Swaro scope and will be saving for new bins. That is my big reward for my new role along with a Skoda Octavia estate. My Dad would be proud of my sensible car choices at least. My 19 year old self, less so.

Dudes, it's been excellent.