Now the juicy stuff! I got out into the Everglades National Park a number of times both day and night and there will be another post about the birds but two nights and three days in the park produced many highlights including those featured below.

Apologies for the glut of swearing early on. It was an extremely visceral and exciting experience finding a snake that big! In an effort for chronology I will start at the beginning.

Prior to heading to the Everglades the only native reptiles I had seen were a couple of Florida Softshell turtles. I had been in the Keys for a day before I sought to explore. I headed straight for the Anhinga Trail within the park, a couple of miles west from the gate. Immediately on arrival there were Brown Anoles everywhere along with giant Eastern Lubber Grasshoppers. Out on the pool were two American Alligators. I was the first person on the trail and was alone with these two giants. A third gator bellowed out in the sawgrass beyond the pool unseen. The smaller animal hauled out by the path providing a nervous obstacle to navigate. I breathed in and moved past it on the other side of the path.

Further Softshells were messing about in the water and I saw my first Red-bellied Cooter messing about in the water chowing down on Water Lilies. A Green Anole was seen on the rail of the boardwalk, the first of three I saw in a similar location (the final one was a brown morph). No further Alligators were seen on my first trip although I had a favoured loafing spot pointed out underneath the board walk which would later prove productive.

A trip down to Flamingo provided plenty of birds but no reptiles. The star was a brief Manatee which was seen in very turbid water round the jetties. I failed to find any Crocs in this area.

I returned to the park road in the evening determined to try and add some snakes. A number of Southern Toads and dreaded Cane Toads were seen on the road in plus two freshly killed Yellow Rat Snakes. I cruised at 20mph to prevent myself from squashing the targets (and it was the lowest speed the cruise control dropped to).

I turned back towards the Anhinga trail and about half a mile along there was a speed bump on my lane. No, it was moving. It was an enormous snake. My first live snake of the trip and it was a monster, the invasive Burmese Python. It ran from the centre of the road to the margin, 2.5-3 metres in length. Not the fattest of specimens and not enormous but to me outrageous. Mixed feelings about the status of these reptiles contested and lost to the awesome animal I watched slowly making its way into the verge. My sweary bit of video isnt good but it shows the moment for posterity. I had been told not to mess with these guys if they are over 2.5m due to the risk of being overpowered (and the nasty bite they possess).

I moved onto Long Pine Key after passing a dead Banded Water Snake and flat Cottonmouth. I was 4-1 down, dead snakes to live ones but thankfully I didnt see any further dead ones that night. I did however manage to see a Southern Ring-necked Snake, a small fossorial species amongst the pine needles and toads in the hammock.. This species is a mildly venomous rear fanged colubrid which is pretty tiny. It isnt really able to bite so poses no risk to humans but I failed to make the grab instead contenting myself with some awful video as it thrashed across the road.


After this I cruised towards Pinelands and was greeted by a beautiful juvenile Florida Cottonmouth on the road. A real diddly job this guy was loving the warmth from the blacktop. I managed some terrible photo before a fake strike had me retreating. A Great Horned Owl at the turn was awesome in the headlights before sallying off into the mosquito filled darkness. The return failed to unearth more snakes but I did find a Southern Leopard Frog amongst numerous Cane and Southern Toads.


A return visit during the day revealed similar stuff but with the family in tow it was fun to show them the gators and my wife found her own one out in the Sawgrass. We had further views of Turtles and Manatees to go along with the gators but failed again with the Crocs. Izzy was determined to come along for a herping trip after seeing the area and my successes.

My final diurnal visit was again similar but I found a loafing Alligator in the canal just outside the park whilst looking at Swallow-tailed Kites. I also had some great views of Gar and weirdly a Plec catfish more familiar in fish tanks. On the Anhinga trail a nest of Florida Softshells suddenly erupted beside the path and I managed to get 7 of them into the water before they were trodden on or molested. One was picked up and bothered by a family but I think they all made it into the water which isnt bad. An amazing site and one that brings home the odds for the small hatchlings. At Flamingo the magic happened. Two Manatees were drinking from an outflow giving my best views of the holiday when they shifted aside. A French-Canadian family started shouting 'Alligator' but I had a feeling it would be a croc. I quickly dodged round and saw a fabulous, if slightly small American Crocodile' with its head in the outflow briefly. The Manatees were hardly bothered and slowly drifted away whilst the toothy predator drank before sinking into the muddy waters not to be seen again. On leaving Flamingo a very freshly dead Everglades Racer was on the road. A very sad sight for a big, active snake.

Returning back to base I picked Isabelle up after a flying feed and we headed back to the park with stocks of coffee and sweets and bedding for her to nod off. She didnt though! We started off with a couple of Southern Toads before we were tailed by some herpers doing a much greater speed. More fool them as they overtook us near the ranger station. We turned and they carried onto a dirt road. We got 100 yards further along and a Banded Water Snake came out onto the road. This was a big fat Nerodia and I didnt want to mess with it but Izzy was right in there having a look as it left the road. The other herpers returned just as the snake left the tarmac and didnt stop. More fool them. Both Izzy and I were buzzing after seeing this. It was really impressive and great to see a live one after the RTA victim.

It wasnt long before we found another snake, this time a Cottonmouth. Izzy had to be restrained from getting too close to the highly venomous pit viper. We got excellent views as we encouraged it to leave the road as cars whizzed past. It was bigger than the previous nights individual with little yellow in the tail.
A dead Corn Snake was a blow as it again was pristine and very fresh. We didnt do well with rat snakes on this trip sadly. A second Cottonmouth of the night was on tarmac near Long Pine Key and we got further excellent views with Isabelle being a bit more circumspect this time. It had lost its tail tip but was feisty enough. 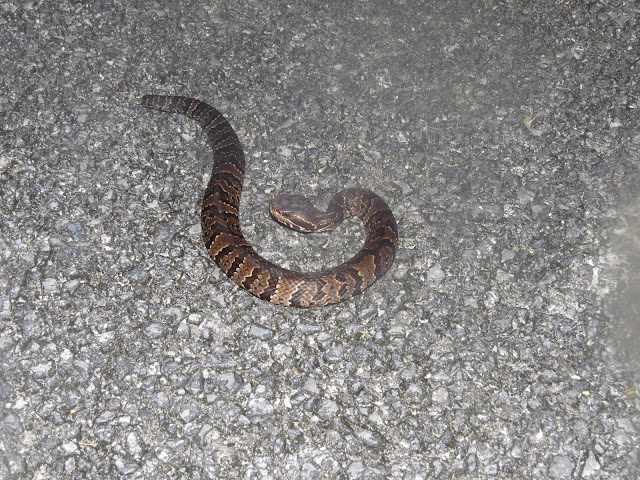 We called it a night as both of us tired and I kept confusing pine needles for herps. An excellent way to round off a great introduction to herping in North America and I definitely have a sidekick for future missions.