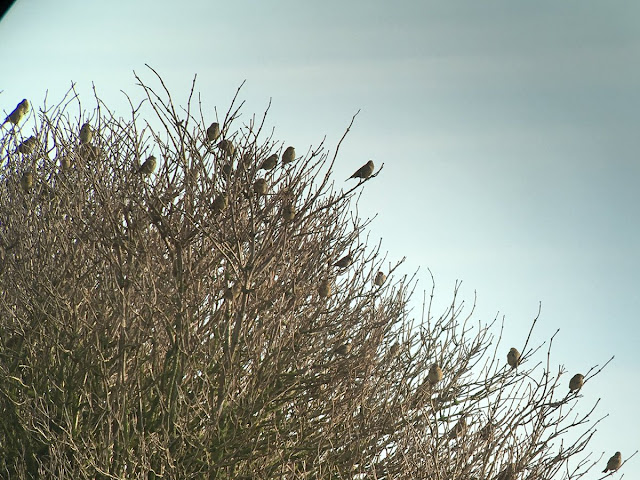 Today at Barmston there were about 300 Corn Buntings. This is an enormous total in a national context and truly an amazing sight and sound. I have only previously seen these sort of numbers on the meseta in Spain and with them flocked up the jangling keys sounded amazing. Trevor Charlton was already on site with another birder counting the buntings when I had a paddle along to the Earl's Dike. I had about 50 birds foraging around the Dike with Goldfinches and Yellowhammers and simultaneously Trevor had 226 perched in a single hedgerow. With foraging birds in the field and birds in adjacent hedgerows it seems likely that 300 or so are present in the general area. A female Merlin sliced through my flock by the Dike like a hot knife through butter but fortunately for the buntings missed everything. Settling for haranguing the birds in the next hedgerow.


Walking up the west side of the fields I got nice and close for a count and managed 177 including 165 in a single flock. The female Merlin settled in a tree keeping the buntings alert. Amongst them were plenty of Reed Bunting, Tree Sparrow and Linnet as well as the aforementioned Goldfinches and Yellowhammers.
Checking offshore was somewhat forlorn as there was little movement over the high tide and just two Red-throated Divers and a whopping 33 Great Crested Grebes. A few Turnstones and Ringed Plover were on the breakwater south of Barmston.
As I was leaving I noticed a Hooded Crow preening for all its worth, looking a bit tatty. Two had flown over earlier in the same general area and three were present today but I managed two sightings of singles plus one of two birds together so can't be sure I saw all three birds.
In the afternoon I watched a reedbed area nearby and had four Marsh Harriers coming into roost including some epic display from a couple of males trying to entice a female to retire near them.