Everyone loves a lifer. I prefer 2

Yesterday against my better judgement I headed up to flamborough a'twitching at 6.30pm. Its September and thus it isnt light for very long. There were very many people there and the eastern waif I had come to see had pretty much gone to bed. not seen since 4pm I was told. Was talking to John and Lawts when a Wren started tekking. A softer tek back was heard and then a small grey bird dropped through the willows. Cue mayhem as everybody tried to climb in with it. Fortunatly sanity eventually rained and people moved back allowing the Eastern Olivaceous Warbler to find itself in my bins view. Mega score. It was tail dipping away and I got lovely views of its backside although only fleeting glimpses of the whole bird which struck me as a grey and long tailed warbler. Happy days. Some others weren't so lucky.
Today an early finish allowed me to catch up on a bit of a tart in Common Rosefinch. Only a grotty juv but it showed well on elders. Also FINALLY caught up with the Hornsea Crane.
<> 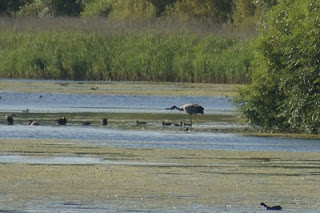 Common Rosie - one of my bogies

Was one of mine until today. I must be catching you up now as your stuck up there...

Aye, was on 345 when I last checked. Can't remember my last lifer! Should maybe go up the Shets in Oct!

Nice one, James, let's hope the rares hang around for the meet next week...

Marcus - oh well maybe not catching you quite as fast as Id hoped...314/5 depending on the outcome of the Collared Flycatcher. Apparently there are 3 Rosefinches down the point at the moment. Piss por you cant remember your last lifer. Must say I saw your tweets about the alder fly and the merlin/snob combo. Brings it all back.

Pete - I hope its goign to be mungus as im not away next week. If I have to go to the west for some crazy Yank I will let you know!

Just added another to Bubo - Bairds was missing. There could be others!

I think the last lifer was Collared Prat??

Was there much else last Autumn?

Not a clue - I was in the middle of new baby nirvana/hell so i went from Leach's to Fudge duck for lifers although I did see the bluetail dusky combo in late oct.