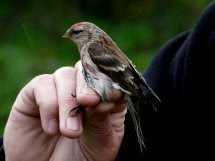 Went to Spurn yesterday morning for a yomp about for some early migrants and I was not to be disappointed. The drive up produced a couple of flyover Little Egrets. A wander down the triangle from the Rose & Crown produced plenty of Snipe, Curlew and my first self found Wheatear this year. A year tick were a small party of Brents that flew past. I could hear both Willow Warblers and Chiffchaffs but they were all a bit distant to distinguish. Calling in at Canal Scrape failed to produce much but as I wandered across Clubley's my first couple of Yellow Wags went over my head. At the seawatch hide a few were vismigging and I stopped with them for a while seeing a Long-eared Owl circle clubleys before heading to the canal zone and seeing my first Willow Warbler, House Martin, Blackcap and Green Sandpiper plus finding a very pale Lesser Redpoll which caused much debate before being ID'd - the first Lesser of the year at Spurn but I wanted it to be Mealy for the self found list...still a good find. I found a single Common Scoter whizzing past and a Merlin shot across the back of the field. A Gropper was singing by the entrance to Spurn YWT and eventually showed at the 3rd attempt, my earliest by a distance. Heading up to Sammy's with Geoff Dobbs & John Sadler produced little of any note but a self found Blackcap and many Willow Wobblers were additions to the self found yearlist. We did get some views of Yellow and White Wags on the deck - one a clasicish male and the other a grey rumped female. Eventually we headed back and trolled round Beacon Lane where 12 Little Gulls shot off the lagoon but no terns lurked. A failed attmept to find the Black Redstart at the holiday camp was a pain and just as I was leaving a pair of Garganey went onto Canal Scrape and then Clubleys. I missed these but as recommpence I managed to get a nice photo of a Yellow Wag on the phone which I will upload asap dependent upon carphone warehouse getting my new phone to me. Last of the day was a House Martin whizzing over a hotel in Wetherby where I was at a wedding. Mint.
Posted by James at 10:04