This is a little bit of a catch up post after a series of adventures and odds and sods over the last few weeks. It is illustrated with thanks to Pete Clark who has a new camera and now knows how to use it and yet he is still happy to share his photos with me. 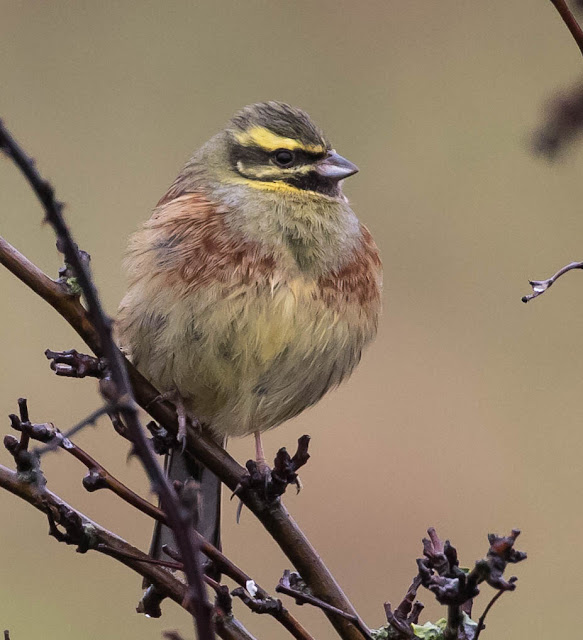 So lets start with the Cirl Buntings. Working with Pete and Paul on an infrastructure job in the South-west we found ourselves with the afternoon off after an early start. Our original plan to see the Slapton Ley Humpback went up in smoke when it promptly did one so we went to Torbay to attempt to catch up with wintering seabirds and passerines. A swift transit from Somerset to Broadsands was only interrupted by a Subway stop for Paul and further sustenance for the remainder who fancied actual food. Annoyingly unforecast rain put a dampener on things as did a sea fret which obscured the bay. A Chiffchaff sparked up giving the 'swee' call. It looked like a colybita so thats what it was ascribed to as was its more conventional calling friend. After half an hour we were somewhat bunting-less and hiding in the bandstand when we noted lots of Chaffinches and Linnets in the stubbles. Soon we were seeing buntings and before long at least eight Cirl Buntings were seen foraging on the deck before coming to sit in the small trees by the beach. Great views were had and they were Paul's first UK ones so everyone was happy.

As the buntings lost their lustre we turned our attention to the sea where the only grebe was of the Great Crested variety and shared an empty bay with a somewhat forlorn looking Razorbill. We then focused on trying to find a Firecrest, Yellow-brow or Sibe chiff in the trees around the back car park only to find a singing Cirl Bunting, a standard Chiff and a duo of Goldcrests. Not quite what we were looking for but handsome enough.

We upped sticks and shifted to Brixham harbour, desperately trying to re-enact our visit of three years prior when 30+ Great Northern Divers shared the water with 8 Black-throats, a banana bill, 2 tysties, 2 slavs, 2 Red-necked Grebes and an Iceland Gull. Just outside the harbour on that occasion amongst a further flotilla of GNDs was Clet the Bottlenose Dolphin, famous for trying to shag Irish swimmers. This time however there were two Purple Sandpipers and a very dead Gannet. 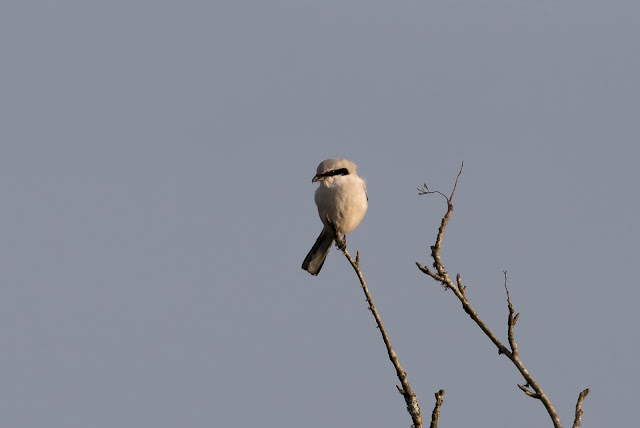 The following day we worked rather later and thus had less leeway for adventure so slipped into the Quantocks for our constitutional. A Great Grey Shrike had been wintering not more than 6 miles from our B&B (the wonderful Blackmore Farm in Cannington - go there, its great) and an update from Brian Hill in the morning convinced us that Pointless and the Chase should be forgone for a few hours searching the upland heath for this bandit. Several Ravens, Peregrines and Red Deer later and Pete found it on a bush as we spread like a net over the valley to ensure it didn't evade our attention. Good views were had, if a little distant, but it was evident that the sun was going to emerge so we did a loop to get on the bright side of our mini-murderer. Pete managed to stalk it with patience and get some reasonable shots with the new camera without it ever getting close but it was well lit so some suitable souvenirs have been saved. 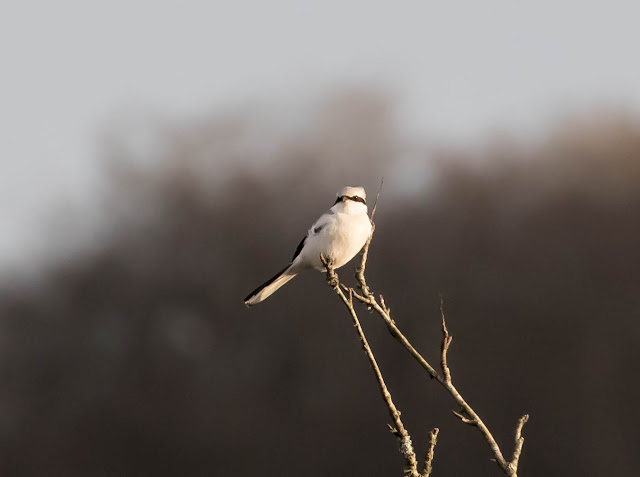 Not illustrated was yesterdays jaunt to Flamborough. I slept through my initial opportunity to add Puffin to the PWC yearlist but rather than sulk I decided to do a walk of the south side of the outer head, returning via Old Fall hedge and plantation. My first Coltsfoot and Red Dead-nettle flowers of the year were seen around the headland car park but little of ornithological interest. I moved stealthily along the cliff top when I finally managed to share the same space and time as the wintering male Black Redstart. Suitably dumbstruck I failed to record this with any sort of photography before it made its escape down the cliff. Indeed whilst it felt spring-like this was very much the highlight of my walk as the only other migrants noted were a band of 23 Wigeon on the sea and a brace of Rock Pipits flying over Old Fall plantation. A rather horny woodpecker was knocking seven bells out of the Sycamores in the aforementioned plantation but no female was in evidence. I moved on in search of brownie points by taking a trip to the dump and completing my flatpack duties.

Today I head to Perth for a somewhat different job which hopefully will reacquaint me with the Nazguls of the Spruce plantations as they perform their seasonal display flights. Paul is my travel companion on this occasion and we stopped off en route to check up on the wintering Black Scoter at Cheswick Sands. It was very much not in evidence but this didn't harm a beautiful Northumbrian scene with mountainous dunes providing the elevation to scan through the exceedingly choppy surf. There were plenty of wildfowl riding through the white horses and two Great Northern Divers were the first thing I laid eyes on. Several hundred scoter were offshore but none appeared to be anything other than the common or garden variety although the brevity of the views hindered our attempts as the swell rolled in. We did see several smaller flotillas of Long-tailed Duck totaling over 30 birds with associate Red-throated Divers, Red-breasted Merganser and Eider. We chalked up a brace of Slavonian Grebes just offshore amongst the duck leaving us content if a little chilly round the edges. 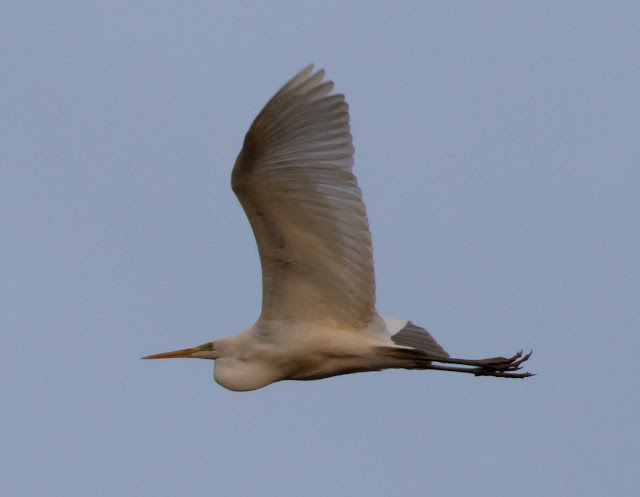 Our final adventure was from three weeks ago when Pete, Paul and myself went in search of Bitterns at Ham Wall. We failed but the Great White Egret roost was pretty cool with five birds in one tree as a horde of Starlings descended on the reedbed. The afternoon was finished with the scene below of a Great White Egret crossing a golden lacquered sky to join its kin aside the reedbed. Superb times in an ethereal location.