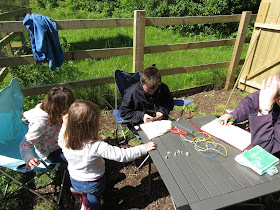 Today to give my wife a little peace and quiet, Izzy, Abby and myself headed off to join my friends Graham and Will Scott, ringing at Tophill Low. The girls were really excited and that went up a notch as we saw Lapwings and a young Hare on the way. We quickly decamped to see a rather steady catch but as we were approaching the ringing site another friend, John Sadler wandered by casually dropping into conversation that a Pacific Swift had just gone through my patch at Barmston. I felt a little sick but a Red Kite lifting out of South Scrub soon put paid to that. It was a Tophill tick for me which come few and far between, largely due to not heading up there often enough! We waved our goodbyes to John and met up with Will and Graham. A sparse catch was interrupted by a very fine male Bullfinch and a rather grand Blackcap. A sprinkling of retraps were where the interest will lie and whilst I dont know the stories just yet we did say hello to a Willow Warbler that was ringed as an adult in 2013. Attention soon wandered to plants and insects and we managed a fine Cardinal Beetle and several orchid species including Common Spotted and Twayblade. Izzy enjoyed ringing so much she was busy trying to sex her cuddly toys by wing length this evening... On a trip to the toilet with Abby we were kindly shown the baby Tawny Owls in the car park and after telling Izzy we had to go back on the way home. 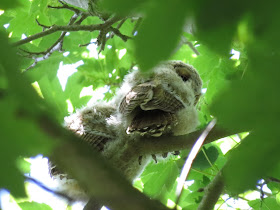 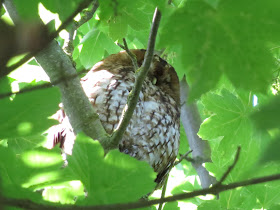